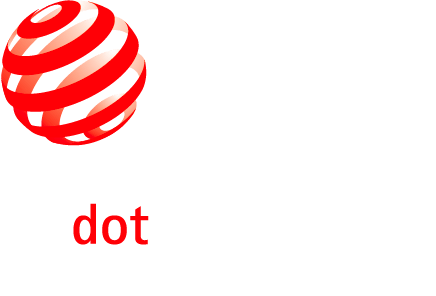 Statement by the Jury
"The Versa smartwatch combines the sensible modern functions of a fitness tracker with the practical applications in urban everyday life."

Your watch is one of the most personal items you own. With the Versa series, Fitbit set out to evolve the earlier Ionic smartwatches, to make them even better daily companions for users. Features like on device messaging/replies, multimedia improvements, and refined core OS features like the Control Center helped us make the Versa the easiest to use fitness smartwatch on the market.

Select work highlighted below. These features rolled out with the Versa and Versa 2 product launches in 2018 and 2019.

As we added additional features to FitbitOS for the Versa series, we quickly realized the simplistic navigation model from the previous Ionic watch would not scale. We created a new, 3-layer model to make the new music, notifications and payments features accessible from any app. 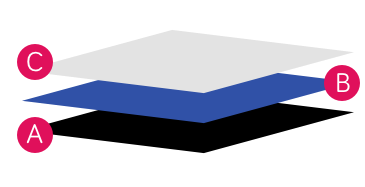 This is the default layer where the home screens and app content is drawn, including 1st and 3rd party apps.

The second layer is reserved for system use, such as the Control Center (Music, Payments and Quick Settings) and full screen dialogs.

The topmost layer is used to show notifications shades. This layer is only used for partial shades, never to cover the entire screen.

The control center can be accessed anytime by holding down the left side button on the device. This gives the user quick access to critical features like making a payment, pausing or resuming music, and toggling do not disturb, from any app. If a user hasn't used Fitbit Pay or music features before, they see educational messaging explaining how to complete setup. 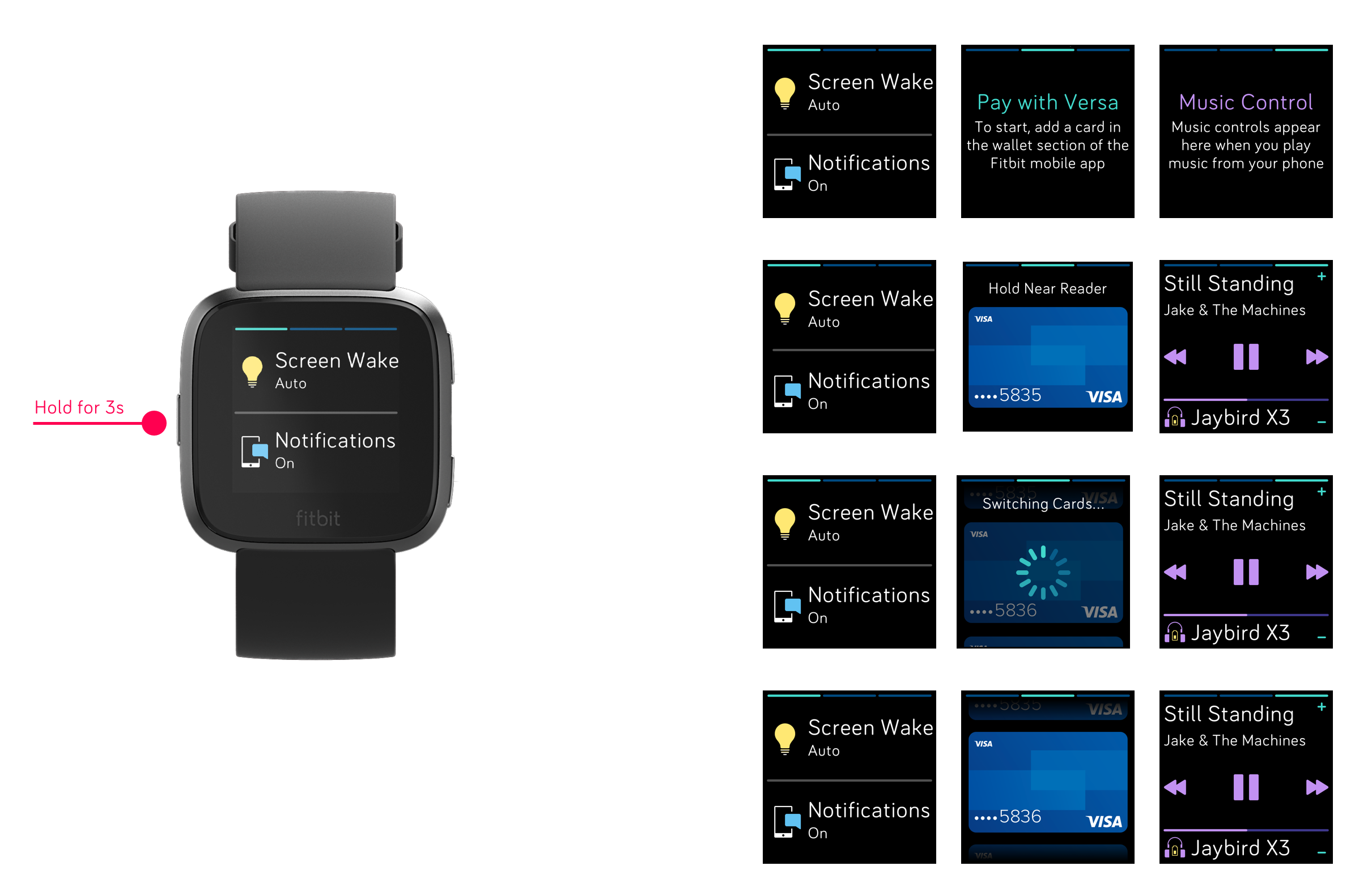 One of the most requested features after the first smartwatch (the Ionic) launched was better ways to communicate from Fitbit's smartwatches. We introduced onboard messaging with the Versa 1, allowing users to send replies to notifications from common messaging and email apps, and even SMS for Android users. The quick replies feature makes sending a reply or emoji effortless even on a small screen. Users can customize their reply presets and emojis from the Fitbit mobile app. The first Versa watch did not have an onboard mic for speech-to-text, but that option was added for Versa 2. 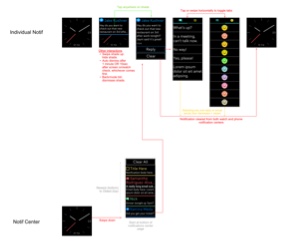 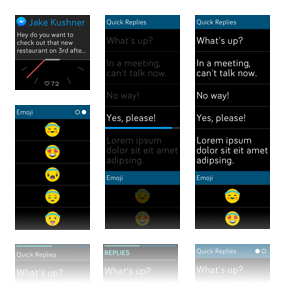 Music has an incredible power to inspire. Whether it’s pushing you to run that extra mile, or lifting your mood on your commute home, the right tunes can get you there. Understanding the importance of getting the beat right, we partnered with Pandora to create the first wearable music experience on the Fitbit Ionic smartwatch. We brought the Ionic music experience to life from an early idea in fall of 2016, through launch with the Ionic watch in fall of 2017. Iterations on this experience in 2018 for the Versa series brought additional streaming providers including Deezer and Spotify.

How it Works: Pandora on Fitbit Smartwatches

Before partnering with Pandora, we explored creating our own radio/DJ service as a simple way for users to get music on their watch without manually building playlists. Users would pick from genre-based "mix tapes" from popular artists which would update and evolve over time. The tracks in these mixes would be refreshed periodically to ensure users always had fresh music. Users could sync these mixes to their device or listen on the mobile app to preview. 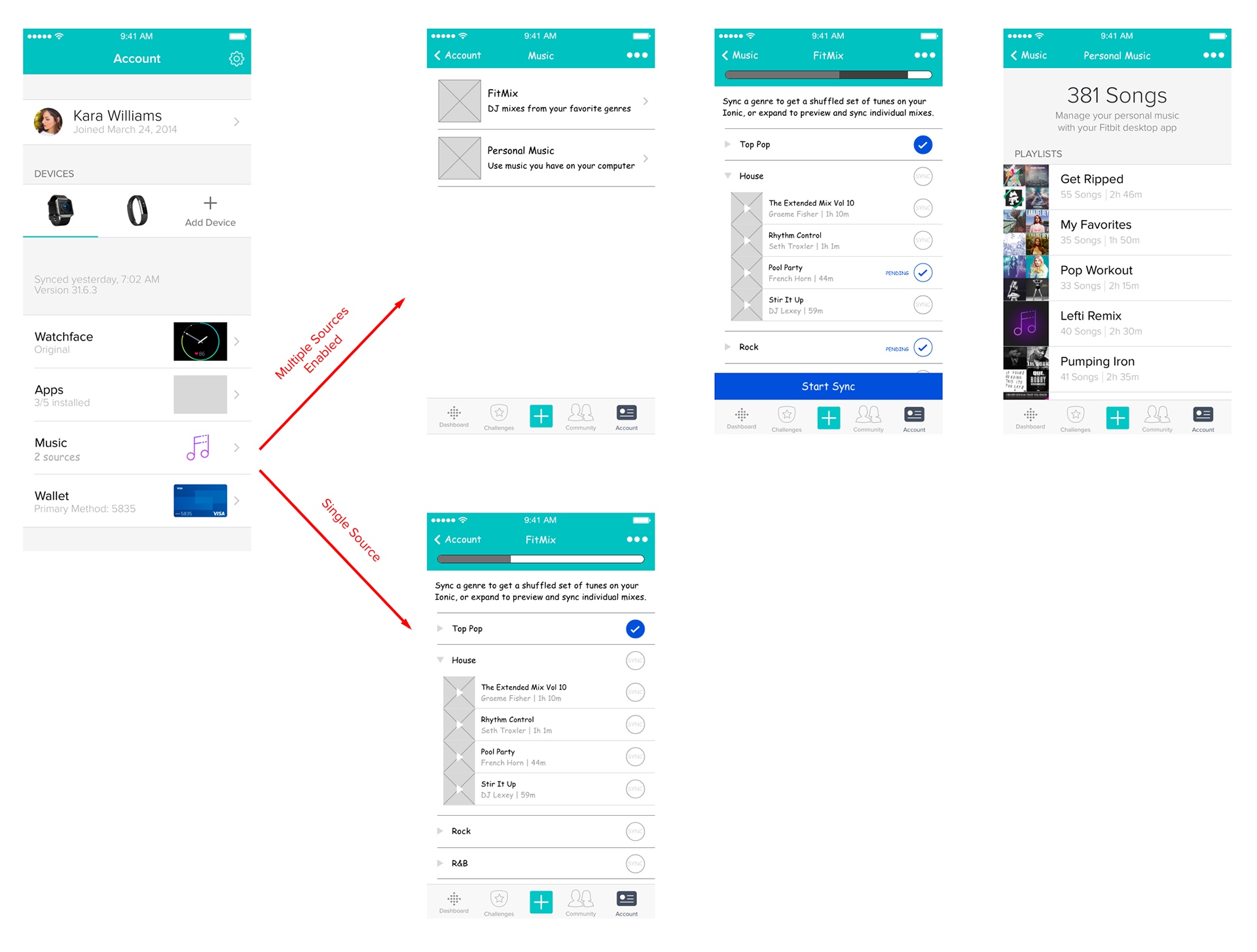 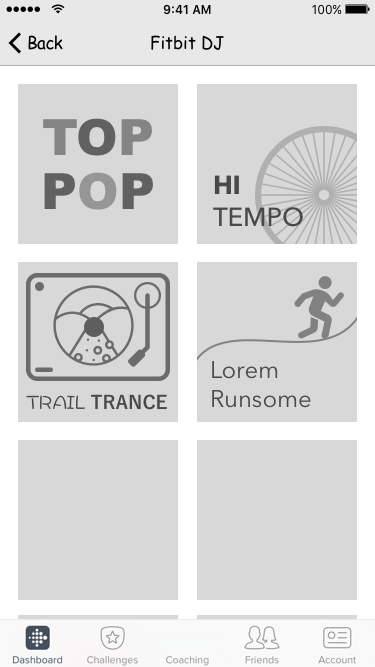 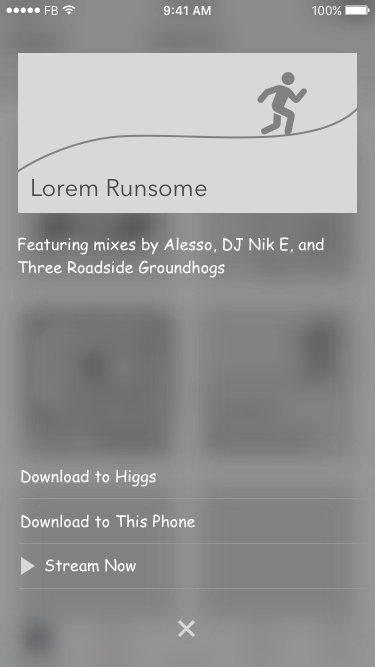 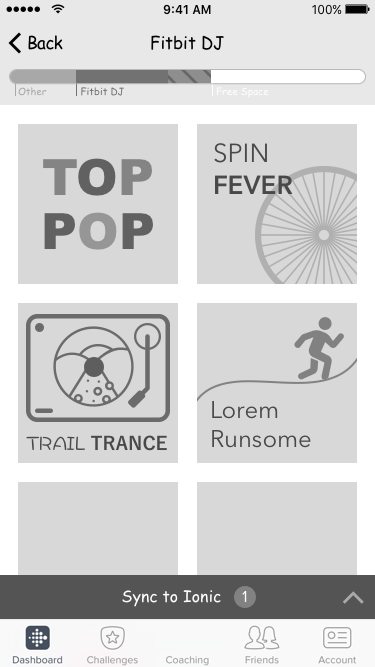 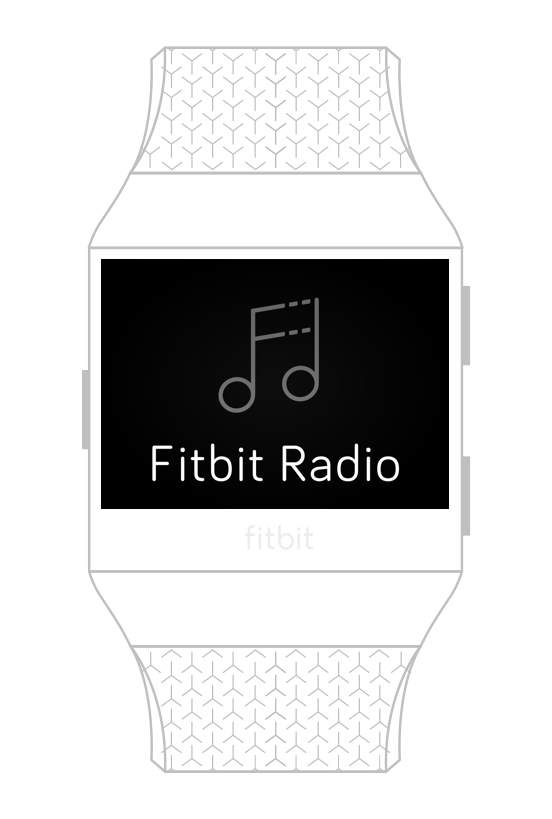 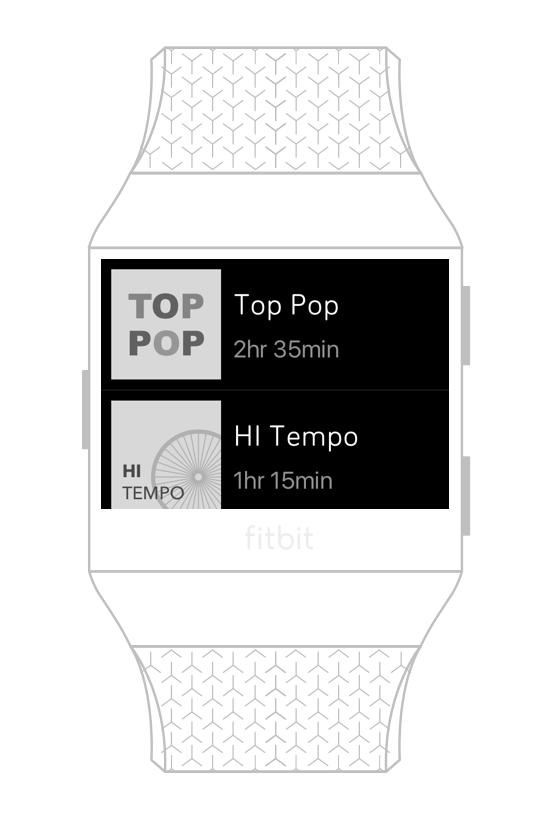 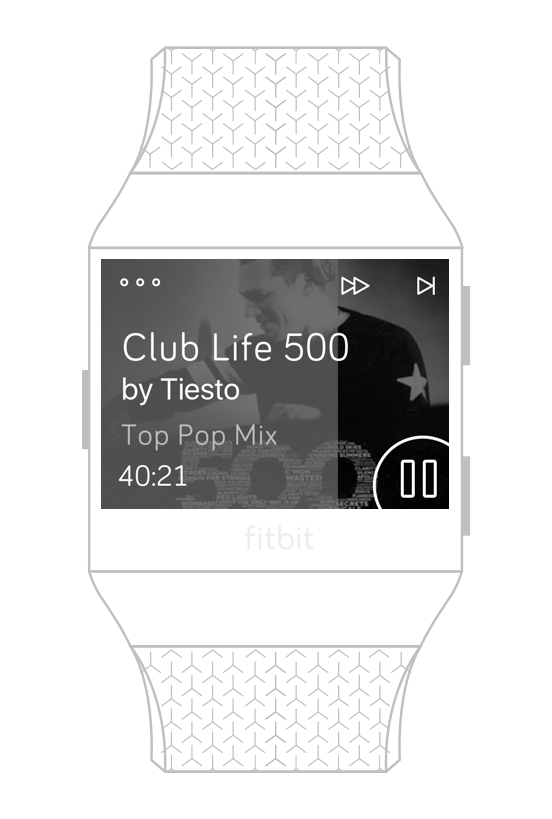 Fitbit decided to partner with Pandora to leverage their existing content and music recommendation expertise. Working with Pandora stakeholders, we designed and prototyped a mobile UX where users could select up to four of their existing Pandora stations to sync to their watch, or choose from a catalog of featured workout stations available to all users.

After conducting UX research in partnership with Pandora, we discovered a few roadblocks:
a) The stations users listen to every day may be  different from those played during a workout (e.g. higher tempo for workout motivation).
b) Many users have too many stations in their account, including some old ones, so showing a list of all stations they had was ineffective.
c) Only Pandora Premium users could pick which stations they wanted to be available offline. Due to licensing restrictions, lower tier plans wouldn't have this option.

Considering these factors, we simplified the selection process to allow users to either (a) automatically sync their top Pandora stations to their watch, or (b) choose from a list of recommended workout stations with upbeat music. 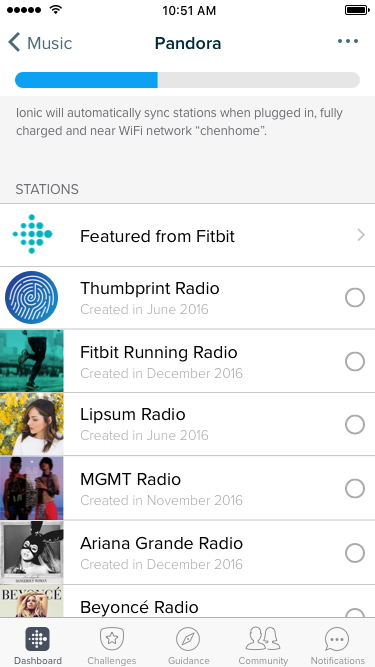 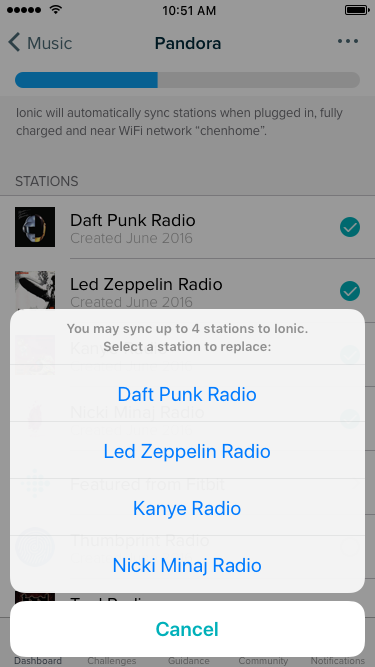 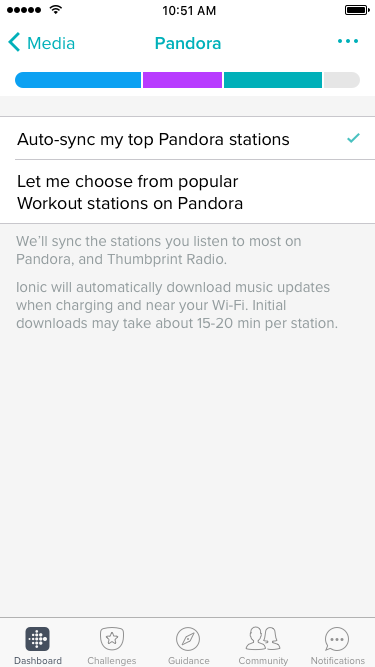 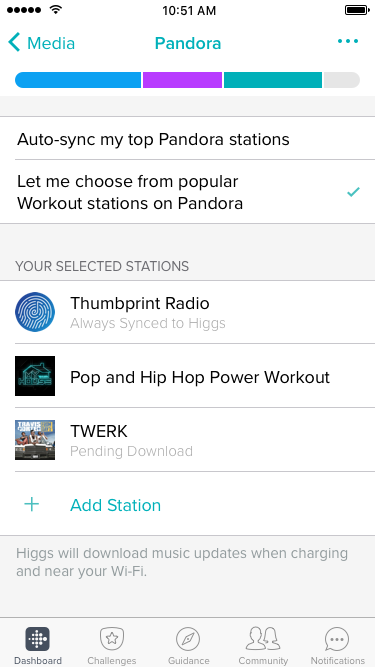 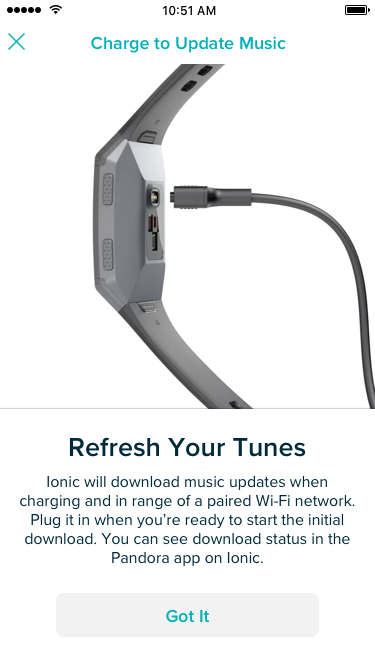 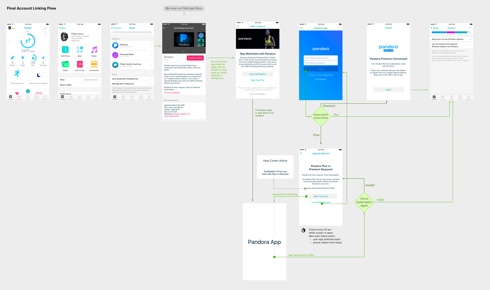 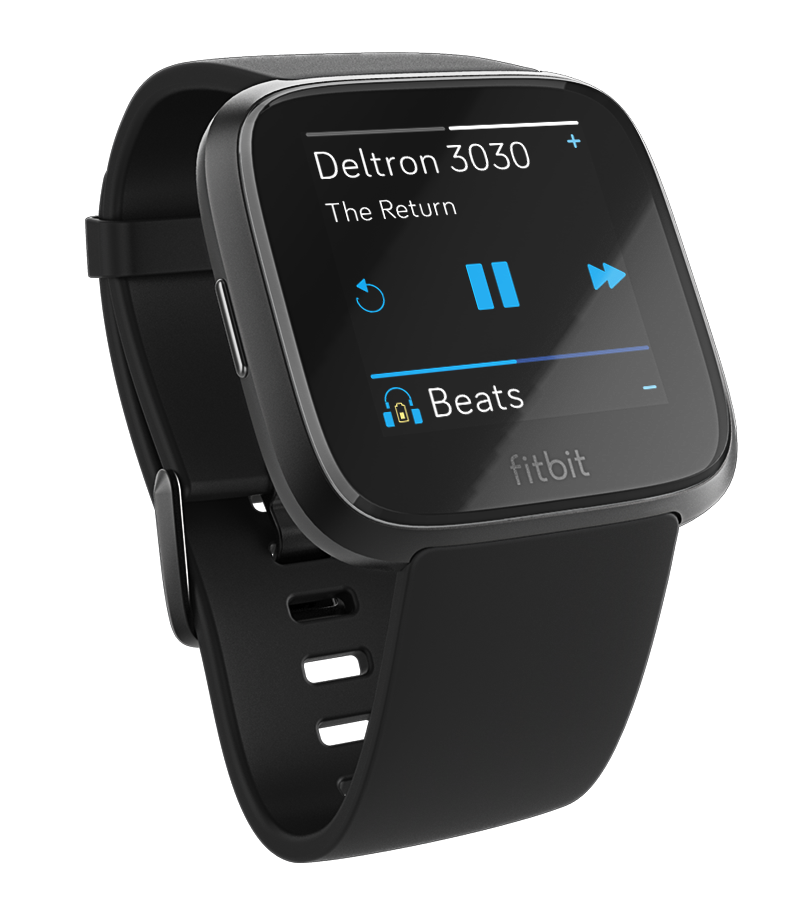 We launched Pandora with the original Fitbit Ionic smartwatch, and later rolled it out to the Versa, with expanded streaming providers such as Deezer and Spotify, using the mobile and on-wrist UX framework first established for Ionic.

Shown below: Pandora playback in the Control Center on Versa

Shown at left: Pandora playback in the Control Center on Versa

Let's design what's next, together.